I think that’s where I am. Not a 1929-style market crash–not that such a thing would have an enormous and direct effect on me–but another kind of crash, the sort where heroes that stand between you and the forces of evil die in the eleventh hour, and you imagine maniacal, vengeful, infuriating laughter echoing lightly in the air, around every corner, from every tall, solid edifice where decisions are made. Saying it in French gives it a little too much drama for “typical” little me, I know, but it also softens the words some and makes them tolerable to my ear.

I am not threatening Canada with the impending arrival of my family; the Canadians did not ask us to come. Nor do I imagine there are countries that really would make us more comfortable. There may be, but I do not know, for sure, and as we are Americans, and Jews, to boot, we are likely unwelcome in most of the places I would consider. What do we have to offer? Skills already being provided by their own people, and offspring who need services their countries are likely providing more efficiently than my own. We lack the gumption of our parents and grandparents that came to America determined to make it, no matter how hungry they had to be for a while. They came here, running from the very ideologies that are gaining traction and power here now. People’s rights are in serious jeopardy. Nazis and Nazi sympathizers are taking seats in our government.

The Jewish New Year is a time of reflection, but it is also happy. New year! New beginning! We don’t celebrate it in quite the same way as December 31st revelers do, but the weather tends to be better, at least in my part of the world, and the forward-looking perspective of hope and possibility is similar. Like the winter holiday, though, there’s lots of room for people to go, well, south. And for me, they have. I am lower than I have been in many years. I’m sure some of it is chemical, and I’m taking my black cohosh like a good little old lady, and have a shiny new anti-depressant. I am not feeling any kind of Rosh HaShana anything.

I wish I were.

I am not a believer. I always felt good, though, dressing up and going to synagogue, seeing familiar faces, wishing a happy new year to people. Lipstick can be very good for my bruised ego. Doesn’t work for everyone. I enjoy inspiring words and thoughtful meditations. It’s easy enough, if you are a thinking person, to replace the word “God” and other difficult ideas with more fathomable ones when you want to be contemplative. For me, synagogue is a place of community and connection more than anything else, which is why I have made it my job to make it a place that feels that way for anyone who wants to be there. The High Holidays, as Rosh Hashanah and Yom Kippur are called, are exciting, because at least in America, that’s when everyone goes.

I can’t get excited about the virtual experience. I know I should try to be a cheerleader for it, but I just can’t. And now I need uplifting more than ever, because all the things I do believe in and value are slipping away, and people are calling them “politics.” I will never understand how or why someone having equal protection under the law (and in action) is political, or how discussing that is political. I do not understand how saying that I have the right to decide what happens to my own body is political. I am not being political; I am being human. What has politics come to mean? Its definition has expanded into territory where it was never meant to be, and now we all hate each other.

I don’t want to talk on the phone any more. I used to enjoy a good blab with a friend, and now, even if I had friends, I wouldn’t want to do that. I barely have the energy to text and message. We all have our own problems, sure. They all feel a little worse right now. Therapists are in such high demand, their waiting lists are closed. We’re locked in. We’re raising a generation that was already losing the ability to communicate by voice and in person with others; now they go to school virtually, and have boyfriends and girlfriends they date on screens. No one touches anyone, and for those of us behaving responsibly, no one smiles, as far as we can tell.

We talk about “the new normal” and joke lightly with neighbors that answering “okay” to the question, “how are you?” is really the best anyone can ask for, isn’t it?

I don’t believe that any of this is the best we could have asked for. You can close your eyes to all kinds of information; we’ve all done it. I don’t blame President Trump for Covid-19. I do blame him and his administration for their response to it, for trying to be politic and downplaying it instead of reacting to it. Because we can look back at Obama’s response to the Ebola virus in western Africa for comparison. (I am not saying President Obama always did everything right; I am saying he protected this country from an epidemic.) Look, the wondrous, history-making, incredibly strong Ruth Bader Ginsberg was 87 years old and quite sick. She hung on despite her illness to the very best of her ability–we all saw her working out with her trainer. She was not going to live forever. I know we will always be blessed by her memory, as will, I hope, her family and friends. But that the rights of so many decent people hang in the balance right now just because she died–that’s wrong. It’s terrible. It’s politics, but it shouldn’t be.

Vaccines against disease are also not in my understanding of politics. To my mind, the work of the CDC should not fit into any definition of politics. Disease Control–it’s right in the name. When you’re depressed, issues get boiled down to simple terms; it’s this or it’s that. My beliefs or your beliefs. We are a country of depressed people–my way or the highway.

As I heard on the radio this morning, I am like the majority of Americans–fall is my favorite season. Fall brings weather I like (at least back home), clothing that makes me comfortable, a few of my favorite holidays, my birthday, and, because I’ve been tied to an academic calendar for so long, a sense of beginning, of possibility. The same feeling I get with a new notebook.

So it took me by surprise today when I thought it was all over.

I had gone to the doctor for an ultrasound because I’d been having some mild pelvic pain. It was over cautious, really, but as I’ve already experienced one breast cancer scare, I don’t like to take chances, and my doctor agreed. I have no idea how to look at an ultrasound, especially if it’s not a well-developed baby I’m looking at. So the technician is moving the wand around in there, and this big black blob shows up in the picture. She is interested in this blob. She keeps measuring it from all different angles. I am trying to remain calm, even crack a joke with her, but she is all business, which scares me. When she’s done, she tells me to wait outside the lab area for my blood pressure and other vitals to be taken. So I sit.

Before I’ve been there even a minute, my eyes fill with tears. I have cancer. My kids will have no mother. I am going to get very sick, have treatments that will make me very sick, and then I am going to die. I cannot stop. Maybe it is a panic attack. But there I am in the hallway with tears running down my face. I am not like this. I’m not much of a crier, not a hypochondriac, but I realize that I was terrified. My doctor walks by and sees this mess. “What happened? Did she find something? I haven’t even seen them yet! Come with me, you’re fine, we don’t need your blood pressure.”

She whisked me to her office, where she looked at the results and told me repeatedly that everything was fine and entirely normal. The blob looked big on the screen but was a typical follicle, unusual in no way. I mopped my face and blew my nose. She sent me on my way with a hug and instructions to freak out about something else. She probably thought I was nuts, but she was very nice about it.

For the rest of the day I should have been elated. I’d been to the brink of death, and I’d been pardoned. I could go home to my family. But I was in a fog. I wandered around in stores, hoping to find a dress to wear for Rosh HaShanah. Everything looked weird or meant for a much older woman. And I was dressed for the gym, not shopping. I bought a hair dryer.

Later when I went to pick up my daughter from school, I missed my turn and found myself on a bridge headed out of the city. A few careful moves later, I pulled up to her school just as she came out. I texted my husband. “I’m going to need a good long hug when you get home. I’m a mess.”

By the time I’d put away the groceries, I felt more calm, and I took the dog out for a walk. My dog loves me like no one else. You can see it in the way he looks at me. 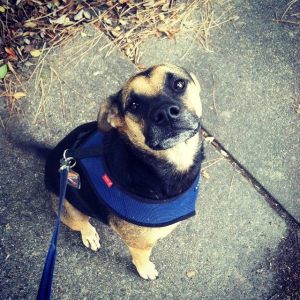 When I’m in the right mood, the dog walk is perfect. It was cool outside, I was feeling better, and Max was being good, not pulling on the leash. He did his business, and when I bent down to clean it up, my back objected. Strongly. I stood up slowly and “ambled” home. My daughter helped me sit on the couch. My husband came home and gave me alcohol. The ibuprofen is kicking in, too. So I can feel the return of that September mood, that sensation that things will be clean and new, that I can make them that way and begin again. I can’t bend over right now, but maybe upright and eyes forward  is the best way to greet the new year. L’Shanah Tovah.

Turn and print all your digital contents, blogs and social networks into amazing real paper books on blookup.com

a Photo Blog, from swerve of shore to bend of bay, brings us by a commodius vicus of recirculation back to dear dirty New York

Thoughts from a Buddhist practitioner

nikolerw's Blog
The World According To Yoni

Daily Discussions of craft and the writing life

Live to Write - Write to Live

We live to write and write to live ... professional writers talk about the craft and business of writing

Howdy! We're the largest independent bookstore in Texas. This is our blog.

This site is all about ideas

"A Word of Substance"

The Art and Craft of Blogging

The latest news on WordPress.com and the WordPress community.